Every educator today needs to learn how to present effectively. But how much do they know about what makes an effective presentation?

“For many of us, there is a hole in our education when it comes to visual communication… In the past, the tools for creating high-quality graphics and multimedia presentations belonged only to a select few. Today, those tools are in the hands of virtually anyone with a computer. However, possessing the hardware and software tools and knowing how to operate them does not a designer make.” (p. 22, Presentation Zen Design).

My colleague Dave and I are very passionate about Visual Literacy. We want to give educators the tools to develop their Visual Literacy skills, and presented recently to our fabulous Primary Leadership Team on Designing Effective Presentations.

Embedding the presentation here would not make sense. If you could understand the content of our presentation just by looking at the slides, then we would have failed in our job. There would be no point presenting if you could just read our slides! However, we did create some other resources which might be useful to share.

We wanted our audience engaged in our presentation. We didn’t want them to feel they had to take copious notes as we spoke. We prepared this handout, because there were a few key things we wanted them to take away from the presentation, and we thought this 1-page handout could be posted at a desk to refer to when designing presentations later.

Finding the right images to support the message you are sharing takes time – and is time well spent. This slide-doc takes you through how to find quality images. It is geared for teachers at our school, so bear that in mind as you look through.

Focus on the Audience

Really understanding what your audience needs and is hoping to gain from your presentation is important. We had participants in our workshop consider the needs of their audience using this handout we adapted from Nancy Duarte’s fantastic resource Resonate.

Some of our favourite resources for presentation design can be found here:

We hope you found these useful! Please let us know if you would like further information about designing effective presentations.

I have a kind of love-hate relationship with the topic of Digital Citizenship.

I recognise fully that we have a responsibility to teach students how to interact positively, consider other people’s feelings, and be mindful of the impact our choices today have on our future. I see this as our responsibility to help shape good citizens full stop – not just good “Digital Citizens”. I love that aspect of being a teacher!

However, I hate the way parents love to blame technology for the difficulties they have with their children. It’s easy that way. Screen time is the enemy, changing children into monsters who argue back when it’s time to turn the device off and so on. It’s much harder to reflect on one’s own parenting style and wonder if you are doing the right thing…

I have presented to parents a number of times on the topic of Digital Citizenship, and one of the things foremost in my mind when we start a workshop is to get both parents and children to recognise the positive things technology has brought to our lives. Technology is neither good, nor bad – it is the choices that people make with technology that make it so.

When my husband and I reflected on how we were approaching the parenting of our two children (9 and 7), we realised that we had perhaps been too loose in our expectations given their age, and knew with the summer holiday moving ever closer, we needed to do something about it.

One thing we were extremely conscious of was the need for any conversation with our kids to be seen as something they had equal part in, and something that was going to be a positive experience. We didn’t want to call a family meeting and then start laying down the law. At the same time, we had some issues to address, so careful planning was needed. 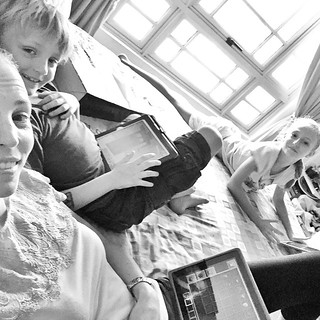 My husband Miles attended a course with the delightful Robyn Treyvaud recently, and realised he wanted to connect more with the kids around gaming, so as not to get left behind, and to be involved in an aspect of their lives that was very important to them.

While home sick, I hashed out a possible approach.

Discuss the Game Plan
If you’re going to have this sort of conversation with your kids, there are bound to be some over-arching concerns or areas to discuss. Having a chat with your partner beforehand is important, so you are both on the same page, and can iron out any differences before bringing in the kids.

There were a number of areas Miles and I wanted to discuss:
– Screen time on weekdays/weekends
– Online access when we weren’t around
– Balance between digital/non-digital activities
– Gaming as a family

We talked about our ideal scenarios for each of these areas, and agreed on some common understandings before we sat down with the kids.

Build Excitement
As I mentioned earlier, we wanted the kids to have a positive experience with this conversation, in the hope that open communication channels established now, will reap rewards for us later. We want our kids to feel they can come and talk to us with issues that may arise, now and in the future.

I decided to make a proper invitation, inviting them to a Digital PJ Party, which got them totally PUMPED! I thought we could have popcorn and watch a movie together after we talked. I may have overdone the building excitement phase, however… Due to farewells and so on, we were going to have to have the Digital PJ Party a while away, but the kids were so excited about it, they forced us to have it in the morning instead of the evening as I had planned. This worked out extremely well, because there was no rush to get out of bed OR PJs on Saturday morning, which was fine by me!

Gather Perspectives
I created a little survey for each of us on a Google Doc, so everyone could write their thoughts down before we kicked off the par-tay.
Questions for Kids
Questions for Parents
While we drank coffee and attempted to wake up, the littles answered their questions. There were questions about how much screen time they thought was reasonable, what their favourite things to do on digital devices were, what they liked doing together with us, and what was important for us to understand, from their perspective.

Here are some of their responses (interesting to see the non-digital stuff come in too):

Miles and I also filled in the parent survey. It had similar questions, but a few extra ones about things we were worried about, and things we wanted our kids to understand.

Readjust the Rubber-Band
We kicked off our chat with the kids sharing their answers to the questions. That was interesting in itself! Giving them the chance to share their thoughts, meant that issues we thought might be hard to tackle, were actually a breeze.

By way of example, Miles and I agreed on a screen time limit we were happy with before we had the party. It turned out the kids both suggested exactly the same time limit as being a reasonable amount of screen time to have on the weekend, which meant we had no arguments at all over that.

[Full disclosure: if our responses had differed significantly, at the end of the day, Miles and I would have made a decision about what we thought was fair, and explained our reasoning.]

We also shared our responses, and there were a couple of things we wanted them to know:

Trust between parents and children is a lot like a rubber band. Pull too tightly, without giving enough responsibility, and you may find your children hide things from you, so as to have a chance to experience them. Hold too loosely, and give too much responsibility too soon, and they may find themselves out of their depth.

We explained to our two that we felt we had held too loosely to the rubber band, and as a result, we had lost some trust in them – partly our fault, partly theirs – but there were some areas where we had to pull the rubber band back in.

This metaphor seemed to resonate with them. They seemed to understand why certain boundaries were put in place, and it wasn’t a hard conversation. 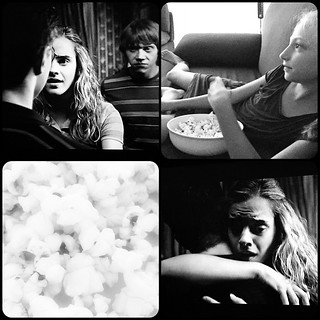 Finish with a Positive
Although we didn’t have a hard time with the conversation, it wasn’t particularly upbeat after the boundaries aspect of the chat.

We wanted to finish with a digital activity we could do together. Some ideas we had included a movie with popcorn, or playing Minecraft together on the iPads. As it happened, we decided on another approach.

The littles had been on and on at us about getting an XBox or Playstation so they could play games together. We held off for a long time. We decided that this could be the perfect opportunity to show that we had been listening to what they wanted, and reinforce some of the new regulations we had put in place (e.g. no unsupervised computer time) by changing platforms from a computer, to a gaming platform instead. Gaming platforms are more limited in their scope, and it is easier to prevent the link-hopping that can get kids into trouble on the computer.

Miles getting schooled in the ways of the XBox

We proposed that if they were prepared to contribute a sizeable sum from their pocket money, we would pay the remainder towards an XBox One. We explained that the time limits we agreed upon would still be in effect, but that we hoped there would be opportunities to play together as a family, especially over the holidays.

The littles were totally stoked! We went shopping together later that day, and that afternoon, the kids were showing us the ropes. It has only been a few days, but we have had no issues with the new guidelines, and everyone seems pretty clear about being on the same page. I will update in the holidays to see how long this digital peace lasts!

I don’t have all the answers, but I feel like at least I have made a start. Digital Citizenship is going to be an ongoing topic of conversation in our household, that much I know.

What approaches have you tried with your kids? What suggestions do you have for us? I value your input.

My colleague Dave and I work on many collaborative tasks. Our antiquated system for managing these tasks was a post-it note that Dave kept on his desk, that we would occasionally look at and cross things off.

Our MS/HS colleagues Adrienne and Jeff had been talking up using Wunderlist to stay on top of their To-Do List, so we thought we’d give it a go.

Why not give it a go with your team?